With the trade war raging, some traders believe when Apple bounces back, so will the market.

Not only is Apple in the cross hairs of trade friction between the U.S. and China, but it has a rather influential position as a Dow stock, and part of both the S&P 500 and Nasdaq. Apple’s 2% gain Tuesday added 25 points to the Dow’s 345 point gain.

Apple was higher Tuesday with the overall market, but its 10% decline since President Donald Trump’s first tweet May 5 about the latest round of tariffs has largely been due to trade. Apple stock has also been negatively impacted by some lawsuits including the Supreme Court ruling against it Monday on a suit involving an antitrust case against its App Store.

“While many US companies are impacted by this latest trade tension, the ‘poster child’ for the US/China UFC battle continues to be Apple in the eyes of the Street as shares were down another 6% with fears running rampant on the Street that these latest tariffs could significantly increase the cost of iPhones globally and have a major negative impact on Street numbers across the board, ” writes Wedbush analyst Dan Ives Tuesday.

Apple is closely tied to China as both a marketplace for its iPhone and other products, and as part of its supply chain, with its Foxconn iPhone factory.

“If Apple itself bounces, it’s going to help a lot of companies,” said Frank Cappelleri, executive director at Instinet. “When one of the biggest stocks moves in one direction, it’s going to have a lot of sentiment and sympathy along with it. It’s obviously oversold.”

But Cappelleri said one day of a bounce does not decide a big move or mean there’s new life in momentum names. Rather, it will be important to watch how its stock behaves over the weeks or months of the trade war. 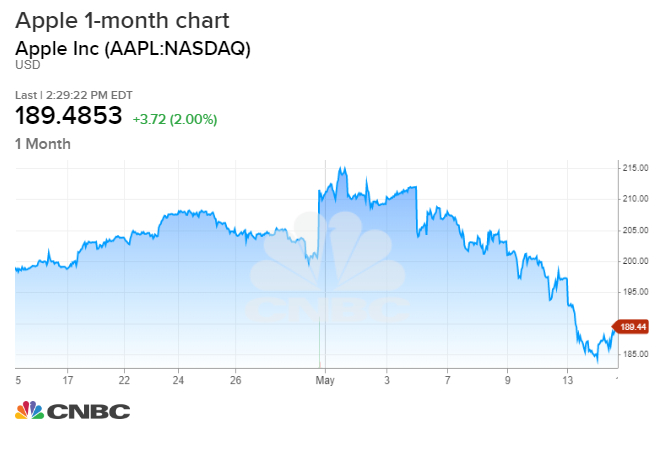 JP Morgan analysts, who rate Apple an overweight, say the company is more likely to absorb new tariff costs than pass them to consumers. But the company could need as much as a 14% price increase on iPhones to offset tariffs. Bank of America Merrill Lynch analysts said Apple’s iPhone cost could rise by as much as 20% if it moved its iPhone manufacturing to the U.S.

Trump raised tariffs on $200 billion in Chinese imports to 25% from 10% last Friday. Ives said those tariffs would boost the cost of making iPhones by 2 to 3%, but if the remaining $325 billion in Chinese goods are put under tariffs that would be a much bigger impact of 10% or more.

WATCH: U.S.-China trade war would hurt Apple’s sales all over the world