Stock buybacks have gotten a bad name in many precincts over the past few years, decried as unproductive “financial engineering” that detracts from corporate investment in growth.

But Apple’s aggressive use of its copious cash resources to repurchase its shares at modest valuations in recent years has shown the power of buybacks for a maturing company in a growth lull. And, for Apple, if not the typical company, long-term shareholders have benefited without compromising the company’s hiring or spending on capital investment.

The slowdown in iPhone unit sales in the past couple of years has restrained Apple’s overall growth since its fiscal year ended Sept. 30, 2015. In fact, net income this fiscal year is projected to be almost exactly equal to what Apple booked four years earlier.

Yet Apple’s resolute plan to use a healthy chunk of its $200 billion in cash — supplemented by roughly $100 billion in low-cost debt — to buy its shares and raise its dividends has paid off well.

With flat net income, the purchase of a net 1.2 billion Apple shares means that per-share earnings are slated to rise from $9.22 in fiscal 2015 to $11.51 this year. Expressed differently, an investor who has not sold an Apple share since 2015 now owns a 25% larger portion of the company today than four years ago.

Apple shares have nearly doubled since the end of fiscal 2015 and its forward price-earnings multiple has climbed, both in absolute terms and relative to the broad market. 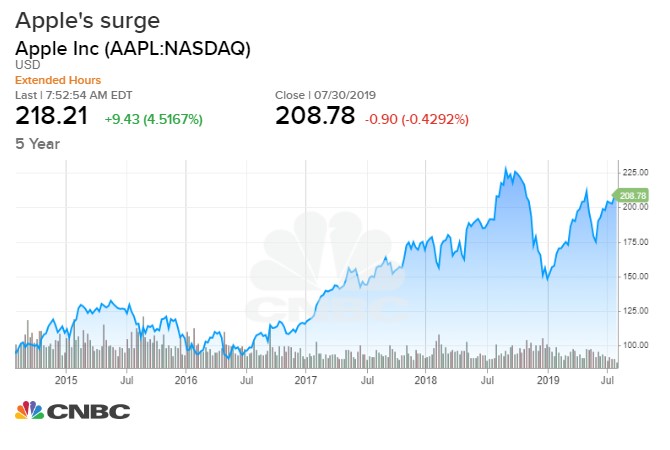 In some ways, Apple is a unique company when it comes to this analysis. The enormous profitability of the first few iPhone iterations and the revival of the Mac franchise left the company with a towering cash surplus. And, make no mistake, there never was a smart, high-return way to deploy $200 billion all at once in capital investment or a major acquisition.

So steady buybacks, a goal to get its net cash to zero, regular dividend increases and continued development of new devices and services have been able to coexist at Apple in a way that most companies would envy.

And, of course, there’s no saying Apple shares at today’s level will prove as good a long-term bet as they’ve been, buybacks or not. The decline of the iPhone might steepen and other services might not be able to compensate, dollar for dollar.

But it’s hard to argue that the company’s capital-allocation strategy has been anything but a positive factor in supporting Apple shares as management works to navigate a transition toward a future less reliant on the hottest new smartphone.