Start-ups’ fears of being strong-armed to focus on short-term profits is one reason some are opting to stay private. But those fears may be overblown, if the historical performance of money-losing biotechs is any indication.

Between 2001 and 2017, only 6% of biotech companies were profitable at the time of their initial public offering, according to analysis by Jay Ritter, finance professor at the Warrington College of Business at the University of Florida. Yet, during the same time frame the average three-year buy-and-hold return for more than 350 biotech companies that went public was 36.3% — beating the market by 14.0%.

“We’ve had hundreds of biotech companies going public in recent years where everybody knows that they’re not going to have any revenue from product sales for years,” Ritter told CNBC. “And there’s no pressure for them to cut their short term losses — as long as they’ve got viable scientific research.”

For the biotech firms that went public between 1980 and 2017, on average, they rose 12.1% on the first trading day, according to Ritter’s analysis. Over the next three years, they then returned an average of 25.7%. While biotech IPOs still under-performed the broader market by 6%, they fared better than the average IPO. Public offerings in general under-performed broader markets by 19% in the 3 years after listing.

“I think a lot of it is talk rather than actual evidence that if a company doesn’t achieve short-term profitability quickly, corporate raiders and activist investors swoop in and boot out management,” Ritter said. “I just don’t see a lot of evidence of that occurring.”

The nation’s top tech investors have voiced frustration about the public market’s focus on near-term profits. A new Silicon Valley stock exchange, backed venture capitalist Marc Andreessen among others, was approved earlier in May. According to its website, the mission is to provide a “market that reduces short-term pressures and encourages a steady cycle of innovation and investment in long-term value creation would benefit companies and their investors alike.”

Firms listed on the so-called LTSE may be required to abide by certain rules, like a potential ban on tying executive pay to the short-term financial performance.

The rise of money-losers

Last year, more than 85 percent of tech companies that went public had negative earnings per share, according to Ritter’s analysis. This year, Uber and Lyft were the poster children for that money-losing business model.

Uber, the biggest IPO since Alibaba, reported an operating loss of $3 billion in 2018 after losing more than $4 billion the previous year. Its ride-hailing rival Lyft reported a net loss of about $1 billion last year. Its adjusted loss per share was $9.02 for the first-quarter. Shares of Uber have been under pressure since listing in May but have recovered most of those losses. The stock is down about 2% since listing in May, while Lyft has dropped by 25% since its IPO.

Billionaire investor Mark Cuban, and owner of the NBA’s Dallas Mavericks, told CNBC last week that Uber’s disappointing debut was “not a surprise” because the ride-hailing company waited too long to go public.

“They just waited too long,” Cuban said. “I don’t think you could have expected anything different … the reality is you’re nine years in and you’re still having to buy your revenue. That’s not a good sign.”

There are a few reasons these companies are staying private longer. A decade-long, low-interest rate environment has forced investors to look for returns elsewhere. And in 2012, the JOBS Act raised the threshold of private shareholders from 500 to 2,000, allowing companies to stay private until they reach that limit.

But the key reason they’re able to stay private is because of a seemingly endless honey pot of venture capital and private equity money. Softbank — Uber’s biggest investor —has flooded private markets with billions in funding. Its $100 billion Vision Fund has deployed about $80 billion in capital. That in turn has pushed valuations to record highs.

“SoftBank’s size is unprecedented and it surely contributes to visibility and validation of high-valuation late-stage private financing,” said Yale School of Management Associate Dean Kyle Jensen. “Because of the enormous amount of private capital available, most companies can stay private longer.”

However, Jensen said these start-ups will continue to face pressure to go public from employees who see the bulk of their net worth locked up in stock and options that would be easier to liquidate if the company were public.

As demand increases, prices for these private companies are steadily rising. The average valuation for venture-capital backed companies is up to $260 million in 2019, according to data from Pitchbook. That’s more than double the value from 2011, and more than 8 times what these companies were valued in 2002. The total deal count also jumped to 3,718 last year — a 370% rise from 2002, according to Pitchbook’s data. 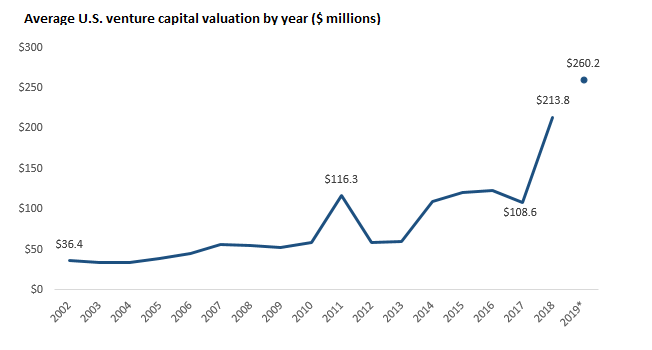 Price to sales ratios, which are calculated by taking a company’s market capitalization and dividing it by the company’s total sales or revenue over the past year, are also on the rise. By that metric, prices have more than doubled for these companies since 1980, according to Ritter’s analysis.

To be sure, biotech’s business model is starkly different from ride-hailing, social networks, or software companies. The reason they’re unprofitable often has to do with regulatory approvals. They can’t make money on new drugs until they’re approved by the U.S. government agencies.

They often feel the heat to go public for different reasons — like needing to raise money for those expensive clinical drug trials. Historically, the biotech sector has also been a gamble. Investors bid up the Nasdaq Biotechnology Index in the late 1990s, only to see it lose half of its value in 2000.

Regardless of the industry, Ritter said investors are still eager to pay for future profits.

“I think it is pretty clear that both private market investors and public market investors are willing to to fund growth in companies and have them focus on growth rather than short-term profitability — provided there’s a story there that continues to make sense,” he said.