Falling interest rates may make mortgages and lots of other loans cheaper, but they don’t necessarily mean good things for the stock market.

Treasury yields have had a big move lower this month, as trade war fears rose and economic data disappointed. Yields move opposite price, so the move lower in interest rates suggests investors are finding safety in bonds. Since the beginning of the month, the S&P 500 has lost 4%.

Credit Suisse analysts Tuesday looked at the period between Dec. 24, the days stocks plunged and bottomed out, to last Friday, and found that the down days for interest rates actually meant lower stock prices.

Treasury yields have been moving lower on worries about the U.S. economy and trade wars. The U.S. benchmark is also following Europe’s German 10-year bund yield, moving lower amid political and economic concerns. The 10-year Treasury was yielding 2.26% Tuesday, after hitting a September, 2017 low of 2.26% Tuesday morning. At the beginning of the month, the 10-year yield was about 2.55%

“Interest rates are a barometer of what future expectations are,” said Patrick Palfrey, Credit Suisse equity strategist. “It’s a good gauge of what investors are focused on. If interest rates are falling, it’s likely the outlook is less bright.”

“It is something that we are watching. At the end of the day, we need an environment that is favorable for stocks. If we have things like trade as a concern or a slowing economic backdrop as a concern, those are likely to show up in declining interest rates,” said Palfrey. “What we would ideally like to see is whether it’s some of these concerns around trade further dissipate, or if it’s a pickup in the us economic backdrop or the global economic backdrop that would likely to be a positive for stocks and at the same time result in higher interest rates.” 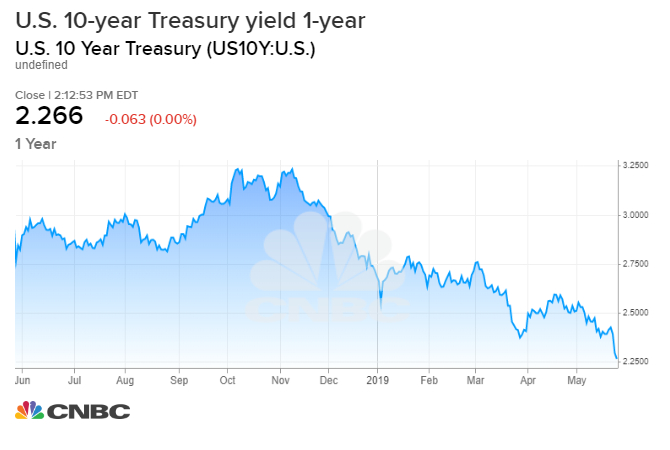 Joseph LaVorgna, Natixis chief economist of the Americas, also studied falling interest rates and stocks, and he found within the stock market, there’s currently a similar warning as the bond market is sending. Cyclical stocks are underperforming defensive names.

“The bond market is clearly telling you rates have come down because it believes growth is going to be slower. It’s not about inflation, as much as it is about growth,” said LaVorgna.

LaVorgna said the ratio of cyclical stocks’ performance to defensive stocks has been falling, meaning the stocks that do better in a growth environment have been trailing defensive names, like utilities.

“The companies that tend to be more forward looking are underperforming those that are perceived to have safe haven status. This doesn’t mean there’s a recession, but the markets are clearly telling us growth is going to be slower than what it was,” said LaVorgna.

He said the ratio of cyclicals to defensives is back to the level it was at in January. He said if the ratio moves lower than where it was during the stock market sell off in December, it will be a concern. Ultimately, he expects the Fed to take notice and cut interest rates. 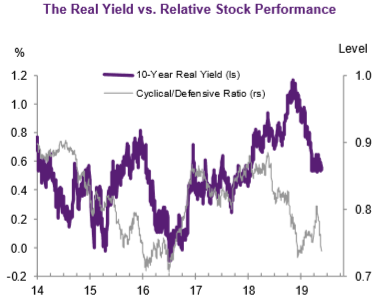 China makes veiled threat about withholding rare earth minerals
Consumers are the most confident about their job prospects in nearly 2 decades
To Top
error: Content is protected !!
Top