Comic writer Mark Evanier was at a casino in Las Vegas several years ago when he heard Marvel behemoth Stan Lee in a TV interview praising the work of various artists who contributed to the brand. Those Lee lauded included a longtime collaborator, Jack Kirby.

Back in the 1970s, Evanier was Kirby’s assistant. He saw up close the talents of that legendary artist, a man who some in the comics industry today regard as the true creator behind beloved Marvel characters like The Fantastic Four and The Incredible Hulk. Kirby’s name never became quite as well known as Lee’s, so Evanier was happy to hear Lee giving credit to him, as well as to the others.

“I went to the phone and called [Lee] and thanked him for doing that,” Evanier recalled. “I said I wish he did more of it. He said, ‘I should do more of that.’ But at times he disappointed me.”

“I have so many things to say about [Lee] that it’s going to take me a while to distill them down…,” wrote Evanier. He continued:

His achievements in the world of comic books were awesome. I happen to think they’re not exactly what a lot of people think but I don’t doubt their size and endurance. I knew him since 1970, worked for him a few times, talked with him at length and fielded an awful lot of phone calls from him asking me questions about comic books he worked on. He really did have a bad memory, if not when he first started telling people he had a bad memory, then certainly later on as he turned more and more into the Stan Lee character he’d created for himself. That’s all I’m going to write now.

Unlike the superlative-laden odes to an inarguably treasured icon of pop culture, Evanier’s blog revealed something more: Stan Lee wasn’t a superhero. He was a flawed human being whose legacy is just as complicated as the costumed demigods he helped create.

In an interview with HuffPost not long after he published the post, Evanier elaborated.

“Stan himself, he was a very complicated man,” he said. “On many levels, there were things to admire about him; there were things you had to overlook to respect him sometimes. I grew up on his work, I got to know him very well, I liked many, many things about him. He participated in a legendary body of work for which I now see obits that vastly over-credited his participation. But I think that’s to be expected at a time when someone like that passes.” 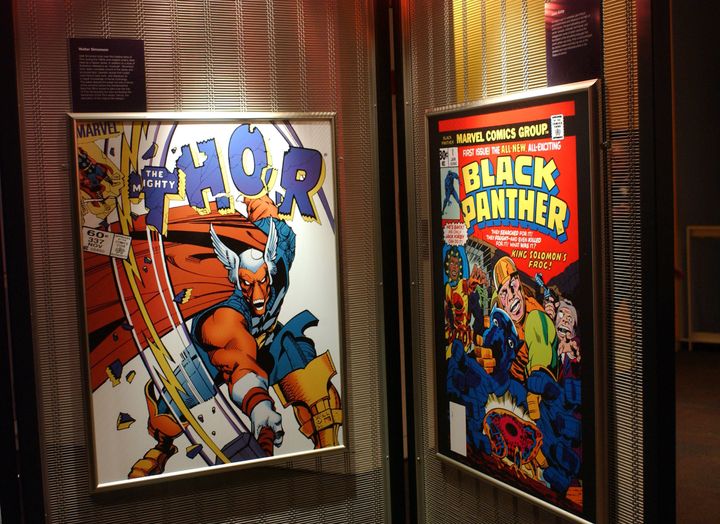 But by exaggerating Lee’s status in comic history, Evanier explained, we run the risk of erasing the other voices who helped build the comic world we know today.

“I think that might at best be half right,” he said of the claim that Lee is the “single greatest contributor” to his field. “There is this problem of dividing credits when there’s no official standard. He worked with some amazing artists who also were writers, being people who came up with plots and storylines and figured out what would happen in each panel.”

“You can say without fear of contradiction that [Lee] participated in this wonderful body of work, that the Marvel characters are an incredible force of nature that will live forever and just get bigger and bigger every time you look,” he added. “You can also say without contradiction that his co-creators did not fare as well in terms of credit or remuneration.”

In reality, the creation of Marvel’s comic book characters was always a collaborative process, Evanier said, with artists contributing to the stories and their arcs, often without proper credit. Lee was always billed as his stories’ first creator, while artists like Kirby or Steve Ditko, who co-created Spider-Man, came in a distant second. They famously resented Lee.

“When I met [Lee] in 1970, it became very clear to me early on that while he wanted to be rich the way everyone wants to be rich, what he wanted most was to be famous,” Evanier said. “And in the last decade or two, I got to see Stan be more famous than he ever dreamed, more a celebrity than he ever imagined, and you never saw anyone be happier at that than Stan.”

Evanier added: “I’m not saying that he didn’t deserve all that, but you tend to think with all that stardom, it’d be nice if some of it had been shown to the other people who were responsible for the storylines and invention of characters. He and I had a few differences at times where I told him to his face that I didn’t feel he had played well with.

Throughout our conversation, Evanier spoke specifically of Kirby. Though beloved by comics industry fanatics and fanboys, Kirby failed to receive the recognition, notoriety or compensation he was looking for before his death in 1994.

“Jack came out of a time when the most important thing a man did was provide for his family and he was frustrated when he was denied the ability to do that,” Evanier recalled. “Stan was younger than Jack but essentially of the same era… It’s just sometimes people have trouble separating what was done, and they shouldn’t because these were co-creations, and they weren’t necessarily co-creations where Stan wrote everything and Jack drew everything. Jack did draw everything, but Jack was a fountain of ideas and concepts and storylines and plots.”

The label “co-creator” shouldn’t downplay the immense role Lee played in igniting an entire fandom community. Todd McFarlane, the co-creator of Venom, told HuffPost he admired Lee as a kid before later going on to work at Marvel. In his opinion, Lee didn’t take credit where it wasn’t due. Rather than say things like “I created,” McFarlane said Lee would use the word “we.”

“I think, unfortunately, part of the thing that gets put into this mix is he lived to be 95 and some of his co-creators didn’t,” McFarlane said. “So we have a tendency as a society to naturally just go to the person in front of us. When there were Stan and Jack Kirby, we talked about the both of them. But once Jack left us the only person left now is Stan.”

“He wasn’t trying to steal [credit] away,” McFarlane added. “It just got put on him. People were misusing the word. I was around a lot of people that would say ‘the creator,’ and I probably slipped up. [I’d say] ‘the creator of Iron Man,’ and he would correct me and go, ‘No, I created it with so and so.’”

Today, Kirby is getting more acknowledgment. Following a lawsuit against Marvel by Kirby’s family, which was settled in 2014, the artist now receives co-creator credit on various Marvel characters. That development, Evanier said, is a positive one.

Although he doesn’t let Lee completely off the hook for how Kirby and the other artists were treated, Evanier still at times counts himself among Lee’s fans. He’s glad the departed comic book legend ― who worked a series of menial jobs in the comic industry before catapulting to fame ― will be remembered for his contributions to Marvel’s eventual global success.

“You also have got these guys who created these comics who came out of the Depression who tried very hard to make livings at that time, who were working in an industry that was not prepared for this level of success,” he said. “The people who owned and ran Marvel in its early days sold it for what now looks like the sale of Manhattan for junk jewelry. The creators did not get rewarded because the people who owned the building had no idea what the material was worth. We still don’t because every time we think it’s reached its maximum, it grows bigger on us. I’m very pleased that Stan got to ride some success on that.”

Reflecting on his time with Lee and Kirby, Evanier said, “I will remember the wonderful body of work that came into my life when I discovered Marvel comics, reading Marvel comics and loving Marvel comics, and at a time when I didn’t really care who did what. I just loved the books and loved everybody who’s responsible in any way for them right down to the guy who put the staples in the comics, and that was a very joyous thing. In some ways, I wish I hadn’t gotten such a deep understanding behind the scenes because sometimes when you see how a magician does the trick, it’s not as much fun.”