Twitter CEO and co-founder Jack Dorsey gestures while interacting with students at the Indian Institute of Technology (IIT) in New Delhi on November 12, 2018.

Jack Dorsey is on a winning streak this year, but unlike some Silicon Valley CEOs, you probably won’t hear him discuss it.

Shares of Twitter and Square — the two San Francisco-based companies he leads — have both rallied more than 45% in 2019 so far. Twitter’s performance marks a sharp turnaround from the stock’s lows two years ago, and Square continues to launch new products and remains one of the most loved names in the mobile payments business.

Other CEOs have run two companies — most notably Steve Jobs who successfully ran Apple and Pixar — but Wall Street has been hesitant about the long-term viability of a similar track for Dorsey. Nevertheless, Dorsey is producing solid financial metrics this year and with very few public comments about them.

Jeffrey Sonnenfeld, senior associate dean for leadership studies at Yale School of Management, said Dorsey’s performance speaks for itself. He is a “a genius who, unlike [Tesla CEO Elon] Musk, doesn’t have to throw in your face,” Sonnenfeld said, and unlike WeWork founder and CEO Adam Neumann, “doesn’t just pretend to be one.”

“He truly is brilliant and dedicated – while avoiding the temptations of vanity and flamboyance his own technology offers some with less discipline,” Sonnenfeld told CNBC. “Like Steve Jobs spanning the leadership of three companies, Dorsey is in rarefied air.”

The 42-year-old founded Square in 2009, three years after starting Twitter, and has led as CEO there since day one. Dorsey’s chief executive job at Twitter has been more fluid. He has moved to and from the executive chairman role in the past decade. He took over as CEO for a second time in 2015 after Dick Costolo’s departure and what was announced as an interim leadership role became permanent.

Twitter’s future is looking brighter after this recent quarter though. Revenue was up 18% year over year, the company said, due to domestic growth and it reached an average of 139 million monetizable daily active users in the second quarter — a 14% increase year over year. Twitter beat analyst estimates on the top and bottom lines last week, which helped boost the stock by 8.9%. The rally last week added more than $2.6 billion to Twitter’s market cap and shares are up more than 45% this year.

Square meanwhile is adding to its years-long ascent in share price and reports second-quarter results on Thursday. Analysts have bid up the stock thanks to a slew of new product launches, e-commerce opportunities and growth in its popular peer-to-peer cash app.

Lisa Ellis, a partner at MoffettNathanson and head of the payments, processors and IT services business, said Dorsey is widely viewed as being “truly visionary” and mission-centric. At Square, she said those qualities have led to the invention of payments hardware, pace of product introductions and ability to attract talent.

Making room at the top

One downside for Dorsey though, according to Ellis, is investors’ concern about his ability to “create space” for strong leaders around him. The stock dropped doubled digits on the day after CFO Sarah Friar announced her departure last fall. Many viewed her as next in line for the top job at Square, and her role as a necessary push-back for the ambitious and entrepreneurial Dorsey. Square hired former Blizzard Entertainment CFO Amrita Ahuja to fill Friar’s shoes in January.

“The departure of Square’s long-time CFO, Sarah Friar, last fall continues to be quite controversial,” Ellis said. “Sarah was more than a CFO – she also had operations responsibilities and was essentially a ‘shadow CEO / President’ to Jack.” 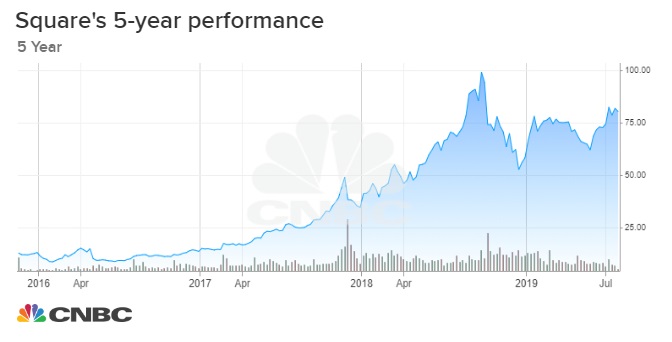 The company has been focused on growth in their consumer products like the Cash App, and it is applying for a bank charter. But Ellis highlighted Square’s payment volumes, which have been slowing for four quarters in a row, and said its point of sale business is under competitive pressure. And while Dorsey is undoubtedly entrepreneurial — Ellis said that may trait not suit Square’s next chapter.

“I worry a bit that Jack is extremely entrepreneurial, so [he] is the right guy to run a company for the first 8 to 10 years, but not necessarily the right guy to take it for the next 10 years, through a period of a lot less glamorous, less sexy growth,” she said.

The nose-ring-wearing, St. Louis, Missouri-born executive has gained favor with cryptocurrency fanatics for his early days in the coding and hacking community. He was also widely embraced by bitcoin communities after Square added the ability to trade the cryptocurrency on its popular peer-to-peer Cash App last January.

And even if his business moves are being applauded this year, Dorsey’s lifestyle choices are consistently under the microscope. His methods for reaching peak cognitive performance — from fasting, to ice baths, to journaling — are the subject of countless podcasts and blogs. The New York Times likened his lifestyle influence to “Gwyneth Paltrow for Silicon Valley.”

Dorsey’s public appearances have been limited this year and have largely focused on self-care and health instead of corporate metrics. Dorsey did interviews with Rolling Stone and went on The Bill Simmons Podcast earlier this year to talk about the state of the company, which resulted in a slight drop in Twitter shares. He also appeared on ultra-marathoner Rich Roll’s podcast to talk about solitude and self-care.

Doresy spent 10 days in Myanmar for a meditation retreat, which excluded “devices, reading, writing, physical exercise, music, intoxicants, meat, talking, or even eye contact with others,” Dorsey tweeted at the time. Critics accused him of being tone deaf as Myanmar stands accused of carrying out a mass genocide and crimes against an ethnic minority group.

Scott Kessler, former analyst at CFRA and now an independent tech analyst, has long predicted that Dorsey would step down as CEO of one of these high-flying tech giants. Kessler said he wouldn’t be surprised if Dorsey left one of his leadership roles by the end of the year “or soon thereafter” — or at least announced plans to do so.

“Dorsey has undoubtedly done tremendous jobs at Twitter and Square, and deserves high praise for the results he has delivered,” he said. “However, I remain convinced that it is simply unsustainable for one person to do both of these jobs extremely well, despite Dorsey’s proven success at being innovative and efficient and building strong teams while CEO of both companies.”

Kessler is betting that Dorsey claims the chairman post one of the companies. The next question, he said is who ascends to the CEO role. At Twitter, he mentioned product lead Kayvon Beykpour. At Square, head of Square Capital, Jackie Reses, is a “strong internal option.”

For now, some bullish Square analysts are happy with Dorsey’s quiet focus on performance.

“Being under the radar and staying out of scandals is a good thing and some of his prominent peers have failed to do that,” said Dan Dolev, executive director at Nomura, who has a “buy” rating on Square and sees potential 40% upside for the stock. “His humble approach should be appreciated — in this era of eccentric personalities, being a work horse is a good thing.”

GE, Spotify, Garmin, Humana, Apple & more
Here’s how the Fed sets interest rates and how that rate has changed over the last four decades
To Top
error: Content is protected !!
Top