Student debt has become a central issue in the 2020 presidential campaign.

Borrowers will have a lot of boxes to check before they can get the $20,000 in student debt forgiveness on the table in her proposal.

They will have to be 1) a Pell Grant Recipient who 2) starts a business in a disadvantaged community and 3) manages to keep that business afloat for at least three years. “Compared to what we’ve seen from candidates like Sen. Sanders and Sen. Warren, it’s a much more narrow proposal,” said Julie Margetta Morgan, a fellow at the Roosevelt Institute, a think tank.

So narrow as to be absurd, said , founder of the People’s Policy Project. “When you look at the requirements, it’s hard to imagine more than a handful of people would ever qualify for it,” Bruenig said.

The differences between the proposals represent a wider divide in how candidates have appraised the state of higher education in the U.S.

Americans are now more burdened by loans they took out for their education than credit card or auto debt. The average college graduate leaves school $30,000 in the red today, up from $10,000 in the 1990s, and 28% of student loan borrowers are in delinquency or default.

Some candidates conclude the system has devolved into dysfunction and a reset button must be pressed. This is evidenced by how Warren and Sanders say student debt threatens the prosperity of an entire generation.

Meanwhile, another camp thinks the burden of student debt poses opportunities and are “pushing for options that basically condition debt relief on doing something that they find valuable to society,” Margetta Morgan said.

Indeed, a senior policy advisor for the Harris campaign told CNBC her plan “is not a student debt proposal.”

“This is just one pillar that supports the senator’s broader proposal to invest in and support black entrepreneurs,” he said.

Under Harris’ proposal, the Consumer Financial Protection Bureau would also be tasked with reducing discrimination against entrepreneurs of color and a $12 billion grant program for black and minority business owners would be created. And black students receive about a quarter of Pell Grant funding, though they make up just 15% of college students overall.

What do we want?
STUDENT LOAN FORGIVENESS FOR PELL GRANT RECIPIENTS
When do we want it?
AFTER OPERATING A BUSINESS FOR THREE YEARS IN DISADVANTAGED COMMUNITIES https://t.co/NigSLakjUW

Yet others expressed concern about the plan to tie debt relief to opening a business, an act which itself can require taking on additional debt.

“Starting a business is an incredibly risky venture for anyone,” said Tiffany Jones, director of higher education policy at The Education Trust, a nonprofit advocacy organization in Washington. Let alone, she said, for the “low-income students, which are using Pell Grants.”

(The grants typically go to students from families with an income below $20,000. Last year, 7 million people received them.)

Harris’ proposal even acknowledges that black entrepreneurs “are more likely to rely on personal credit cards carrying balances than traditional bank loans,” and when they do get a loan, “are more likely to be offered a smaller amount and pay higher interest rates.”

And around half of businesses with employees don’t survive even five years, according to the Small Business Association. “Even most businesses that are not started by people who are right out of college and are not located in disadvantaged areas fail,” Bruenig said.

The senior policy advisor for the Harris campaign countered that the risk involved would be reduced by the fact that borrowers could suspend their student loan payments, without interest accruing, for the first three years during which they’re getting their business off the ground. 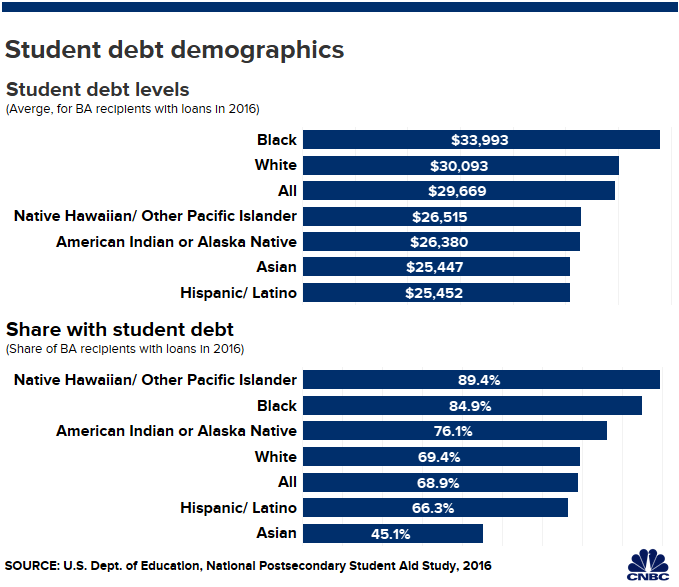 Still, many Pell Grant recipients will likely find it difficult to walk away from their jobs and start a business in the first place, said Jacob William Faber, a sociologist at New York University who studies racial economic disparity. “This is tied to a bigger, kind of bootstrap myth about economic mobility,” William Faber said.

Other critics said the plan is simply too complicated.

“If we’ve learned anything from the public service loan forgiveness debacle, it’s the need to keep loan forgiveness programs simple and straightforward, ” said Mark Kantrowitz, the publisher of SavingforCollege.com. (Less than 1% of applicants have walked away from their debt under that program, due to wonky requirements and a failure by the Education Department and its servicers to explain them.)

The strategy of Harris’ proposal was most likely a rhetorical one, Bruenig said. Its narrowness seemed a direct nod at those who say Warren and Sanders’ plans suffer from being overly broad and unrealistic.

Student debt is likely to come up Wednesday night, when Harris takes part in the Democratic presidential primary debate in Detroit.

More from Personal Finance:
These nine colleges are tuition-free
Millennials aren’t thinking about this risk to their finances
3 retirement essentials to keep more cash in your pocket