The Federal Reserve on Wednesday said it does not expect any rate cuts this year, but did forecast one for 2020.

The central bank’s median target for the federal funds rate is still 2.4% for 2019, unchanged from its March projection. But eight members of the Federal Open Market Committee indicated they were in favor of one rate cut this year, according to the panel’s projections.

The Fed, however, ticked down its expectations for future years. A narrow majority, or nine members, indicated it expects the federal funds rate to approach 2.1% by the end of 2020, instead of its previous outlook for 2.6%.

As expected, the central bank also announced Wednesday that it is leaving the benchmark rate unchanged in a target range of 2.25% to 2.5%.

Four times a year, policymakers at the Federal Open Market Committee submit their projections about where short-term interest rates are headed. The results are the dot plot — a visual, yet anonymous, representation of where members think rates will go over the short, medium and longer run.

Here are the Fed’s latest targets, released in Wednesday’s statement:

In its March meeting, the Fed said it expected the benchmark rate to be about 2.4% by the end of 2019 — meaning that there would no rate hikes or rate cuts before year-end.

At the time, it had also forecast one rate hike in 2020, or a federal funds rate that would approach 2.6% and remain near that level through 2021. In the longer run, the central bank’s March projections indicated the rate would rise to 2.8%. 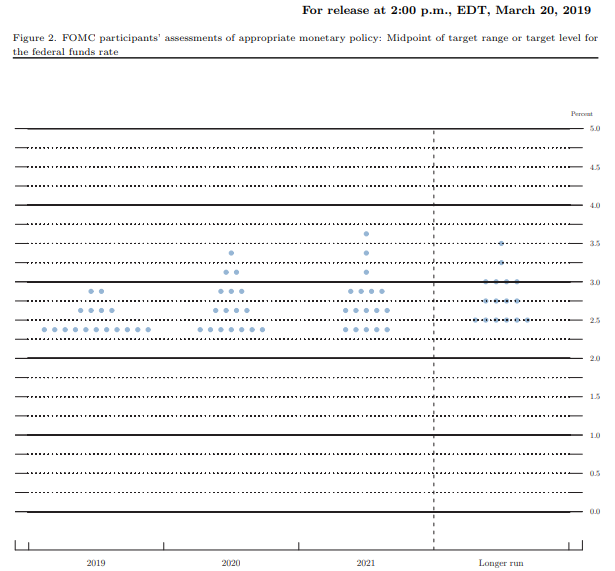 Ahead of the 2 p.m. ET announcement, economists predicted that the central bank would leave rates unchanged and adjust its statement and forecasts, signaling the possibility of a rate cute later this summer.

While President Donald Trump and markets clamor for lower interest rates, most forecasters indicated that the Fed would likely slash its benchmark rate in July instead of this month. Market expectations for a rate cut in June have been hovering around 20%, while bets for a rate cut next month have been as high as 80%, according to the CME Group’s FedWatch tool.

The Federal Reserve has not trimmed interest rates since the financial crisis. But recent reports of softer jobs data and consumer price inflation have led economists to predict that the Fed may cut rates as a preventative measure.

A so-called insurance rate cut would theoretically cushion the economy against weakness and uncertainty. Economists have been particularly concerned about how an extended trade war with China could hit consumer and business confidence.