Pictures from the semi-official Tasnim news agency show the Stena Impero being seized and detained between July 19 and July 21, 2019 near strait of Hormuz, Iran.

Iran is ratcheting up tensions in the Gulf, with its seizure of a British-flagged tanker, yet oil prices have been relatively unaffected.

With the surge in U.S. production and worries about weak global demand, oil is not the indicator for Middle East conflict it once was. A different pricing dynamic has been evolving with new supply calculations based on the U.S. as the world’s largest producer, and the partnership between No. 2 Russia and No. 3 Saudi Arabia trying to keep control on production levels.

In the past, one of the energy industry’s greatest concerns has been that a Mideast conflict could disrupt oil traffic in the key Strait of Hormuz, a narrow waterway through which about a fifth of the world’s oil moves.

Yet after Iran seized tanker Stena Impero there Friday for alleged marine violations, oil prices moved slightly higher, and without the velocity that might have been seen during other periods of tension. Futures in Brent crude, the international benchmark, were up just 2% Monday morning from the low it hit Friday, just before news of the tanker seizure reached the media. At their peak early Monday, Brent futures were 3% higher since news of the seizure.

“What I find amazing is oil has become a broken barometer for Mideast conflict,” said Helima Croft, head of global commodities strategy at RBC. “A few years ago, you could almost gauge how serious a security crisis was because of the oil price.”

The tanker incident comes as tensions between Iran and the West have been rising. The U.K. stopped an Iranian tanker several weeks ago that it said was violating European law and allegedly carrying crude to Syria. A Gibraltar court Friday allowed the detention of the tanker to continue, even though Iran said the ship was not heading to Syria.

Pictures from the semi-official Tasnim news agency show the Stena Impero being seized and detained between July 19 and July 21, 2019 in Bandar Abbas, Iran.

Iran kept the pressure on, saying Monday it had detained 17 Iranian individuals it claimed were spies trained by the CIA and that some would be sentenced to death. President Donald Trump said the claim was false.

Oil came off the worst week for Brent since December 2018.

Brent futures, down 6.4% for the week, moves more on Mideast developments than U.S. West Texas Intermediate crude futures do. WTI futures were down 7.6% for the week to $55.63, losing gains made on expectations that Hurricane Barry could hamper oil transport and refining. But the storm was a nonevent for the industry, which had temporarily shut down more than 70% of Gulf of Mexico production preemptively.

Oil is not a ‘leading indicator’

Last Tuesday, oil prices had moved sharply on comments from Secretary of State Mike Pompeo that Iran was willing to talk about its missile program. Iran denied that statement, and oil did not recover the losses.

“We sold off 4.5% when Pompeo suggested that the Iranians were willing to talk about the ballistic missile program. Minutes later, the Iranians said, ‘no we’re not’ and oil prices still didn’t recover. Since Tuesday, it’s been nothing but escalation and oil has kind of shrugged it off,” Croft said.

Also last week, the U.S. destroyed a drone it said belonged to Iran, but Iran denied that claim.

“It doesn’t mean the security situation is not terribly fraught. It does not mean that we could end up with an unintended escalation through miscalculation. It just means oil is not a leading indicator of how this crisis is going,” Croft said, adding that traders are more attuned now to the trade war than a potential shooting war.

Croft said a big reason why oil traders are not driving oil prices higher is because of the huge increase in U.S. production. The U.S.has now surpassed Russia and Saudi Arabia to become the biggest oil producer. She said oil trading has also changed and the market is more computer-driven with fewer big commodities players trading it.

“The surge in U.S. production to over 12 million barrels a day has created a U.S. firewall against these risks or perceived risks to supply,” said John Kilduff, partner with Again Capital. “They can take all the tankers they want. We still haven’t lost any oil yet. There’s a ton of spare capacity, especially in Saudi Arabia. I think that’s what’s holding prices back.”

Citigroup analysts said the new dominance of the U.S. in the global export market could in fact make a major U.S. Gulf Coast hurricane event a bigger threat than rising Middle East tensions.

“On supply, effects of oil and gas supply disruptions in the US Gulf of Mexico could rival that of the Strait of Hormuz in the Persian Gulf. As the US becomes the largest hydrocarbon exporter, its hurricane season should reassert its impacts on global oil and gas prices,” the analysts wrote in a weekend note.

They said hurricane disruptions could cause wind and flood damage, topple offshore platforms, cut electricity supplies and swamp refineries. Hurricane Harvey, which hit Texas in 2017, was the most recent example of a damaging storm, following the hurricane seasons of 2005 when Katrina and Rita hit the Gulf Coast and again with Hurricane Ike in 2008.

“Disruption risk could emerge in days, escalate in hours as a storm strengthens, but a recovery can take months or years,” they wrote. “On oil, petroleum exports out of US PADD III [the Gulf Coast] are now on par with the level of Saudi crude oil exports.”

“With diversions available in Saudi Arabia to bypass the Strait, the practical amount of exports affected in case of a temporary full closure of the Strait could be similar to a complete shutdown of petroleum exports out of the [Gulf of Mexico] in a couple of years,” the analysts noted. The U.S. exports of liquefied natural gas are also increasing in importance, and they too leave the U.S. through the Gulf of Mexico. 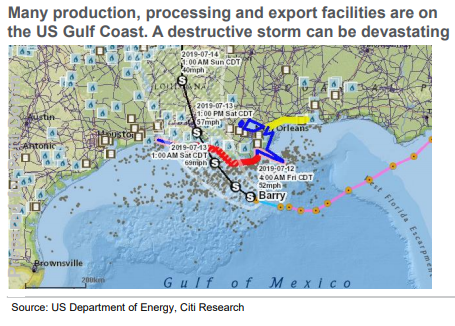 The U.S. now exports more than 6 billion cubic feet a day of gas and the Citi analysts said it will supply 20% of global LNG within 12 months.

“Not only did we put all our refining assets in one basket, but we have all the export assets in the same area,” Kilduff said.

Kilduff said, however, the Persian Gulf could be more impactful to oil in the near term if these types of incidents persist.The tanker seizure follows numerous attacks by Iranian proxies on oil facilities and key infrastructure, such as an airport in Saudi Arabia.

Earlier this month, Iran admitted to shooting down a U.S. drone and the White House prepared to respond militarily. Trump called off the retaliatory response at the last minute.

“One of these incidents is going to be the straw that breaks the camel’s back,” Kilduff said. “It’s going to take the actual sinking of a tanker.” He noted that the U.S. is once more using a key Saudi airbase and has positioned Patriot missile defense systems there.

Kilduff said oil could also head higher after its steep drop, as central banks gear up to provide stimulus to the global economy. The European Central Bank meets Thursday and it is expected to cut rates at that meeting or the next, in September. The Federal Reserve meets on July 30 and 31, and it is widely expected to cut interest rates.

On Monday, Iranian Foreign Minister Mohammad Javad Zarif told NBC News that Iran does not want a war and that the door to negotiations would be wide open if Trump lifts his sanctions. The Trump administration put sanctions on Iranian oil and other parts of its economy after the U.S. pulled out of the Joint Comprehensive Plan of Action, the nuclear agreement made between Iran, the U.S. and five other countries.

The other parties, which include Britain, have been trying to keep Iran in the nuclear agreement. But Iran has moved to enrich more uranium at higher levels and has said it would continue to take actions that could violate the agreement.

Kilduff said that in past major conflicts, oil spiked quickly but briefly and when oil reached its all time, it was not due to a conflict.

“We got to $147 [in 2008] not because of a war but because supply was tight and the economy was in its last phase of booming,” said Kilduff.