Private equity has taken center stage in active investing, and that means the stock market and its investors could face more challenges — especially in a recession.

The transition is already underway and according to asset manager AllianceBernstein, won’t be ending soon. In a note to clients this week, the firm outlined an upcoming decade in which the “main expression of active investing” is in private markets.

Analysts say this shift introduces potential problems. Liquidity could dry up in public markets, causing more volatility. And retail investors may have fewer high-growth opportunities as companies easily raise money privately, opting out of listing on exchanges. Alternative assets are off limits unless you’re a qualified, or accredited investor.

“It throws a spotlight on the resilience of the liquidity of public markets and even questions the point of a public stock market,” Bernstein senior analyst Inigo Fraser-Jenkins said in a note to clients this week. “Soon, active investing is going to be mainly in private markets.”

The switch is mostly the result of relatively low returns from conventional investments like stocks, bonds, or cash. Instead, those managing pension or endowment money are turning to “alternative” investments — private equity, venture capital or hedge funds.

“Given the momentum behind this reallocation, we think we may never again see a situation where the bulk of active risk is taken in public markets,” Fraser-Jenkins said.

Private equity “dry powder,” a term for the industry’s stockpile of cash, is at historic highs at almost $1.1 trillion last year, according to Preqin Private Equity and Bernstein analysis. At the same time, the amount of publicly listed companies is shrinking, and the U.S. public market is shrinking compared to the rest of the world.

As the money shifts to private equity, one implication is that major stock indexes will become increasingly subject to large swings in prices.

Endowments and pension funds have to meet certain liabilities and raise cash occasionally. But some private equity investments have as much as a 10-year lockup period, said Quadratic Capital Chief Investment Officer Nancy Davis.

“It means more volatility in the public market because you can’t get out of these private vehicles — you can’t buy and sell them when you need to raise money,” Davis told CNBC in a phone interview.

The risk of volatility is higher in the next economic downturn, she said.

“During the next recession — or period when assets are not going straight up — these institutional investors are going to need to raise money somewhere and it’s going to be a public market because that’s going to be the only thing they can sell right now,” Davis said.

The CBOE volatility index — Wall Street’s so-called “Fear Index” — spiked this week ahead of a Friday trade deadline even though it has been mostly lower this year. The VIX is down 24% since January.

BlackRock CEO Larry Fink warned against too much allocation into alternative investments at a conference in Boston this week. The CEO said that investors may be over-allocating to alternatives as liquidity dwindles, Bloomberg reported.

“That doesn’t mean having more alternatives is bad — it may be perfectly good,” Fink said, according to the report. “Let’s be clear that with alternatives you’re trading liquidity for more return.” 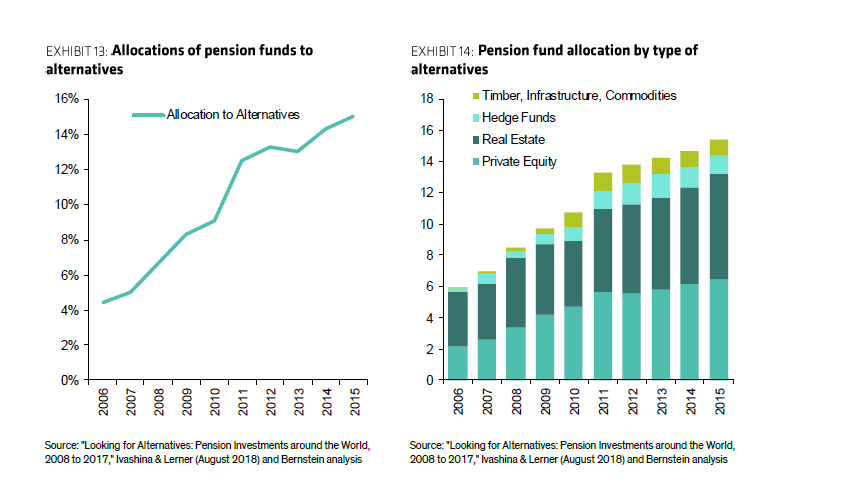 But the alternatives aren’t available to everyone. The average investor can’t get exposure to high-growth companies until they list on public exchanges. While they may be invested through a mutual fund or pension, traders may have fewer opportunities to get in early.

“It becomes hard for public equity investors to access that early high-growth stage of companies,” AllianceBernstein’s Fraser-Jenkins said. “This should be a concern for policymakers, as the public equity market allows for democratized access to investment vehicles in a way that private assets do not.”

In a lot of cases, companies have almost no need to go public. They can gin up money relatively easily in private markets and survive for years without capital from stock markets. By staying private they also avoid some regulatory scrutiny and of course, the scrutiny of shareholders. In 2012, the JOBS Act raised the threshold of private shareholders from 500 to 2,000. This allows companies to stay private until they reach that limit.

As a result, the average age of companies going public has increased. Uber for example, spent a decade as a private company before heading for a listing debut on the New York Stock Exchange this week.

And for investors who can get in to the private markets, there’s the problem of lofty valuations.

For instance, ride-hailing company Lyft had a market capitalization of $15.6 billion this week after starting out around $22 billion the day it listed. Its last private valuation was $15.1 billion, according to Pitchbook. The stock is down 30% since listing in March.

“You have to question valuations in the private market when you have some IPOs like Lyft,” Davis said. “They typically have 180-day lockup periods — the fact that the securities are trading down when by nature there’s scarcity is not a healthy sign.”

To be sure, AllianceBernstein said this rotation into private investments won’t reach a peak for many years. As for the public equity market, its sheer size — $70 trillion versus $5 trillion for private equity — will ensure it’s not completely disregarded, according to the firm.

One factor that could drive lofty expectations for private equity investments is rising fees.

In contrast to the crunch on fees for public assets, private asset fees are going in the opposite direction. Fees for alternatives now account for 43% of total payment to Wall Street for asset management service, up from 17% in 2007, according to AllianceBernstein.

AllianceBernstein found that pension funds implicitly require alternative investments to bring in 25% returns, net of fees. That expected return should make up for the fee cost and amount to a 7% return — the average of U.S. pension funds.

“This is not a realistic prospect,” AllianceBernstein’s Fraser-Jenkins said.

Billionaire investor Warren Buffett has been a vocal critic of buy-side fees and performance. In 2007, the Berkshire Hathaway CEO won a million-dollar bet that an index fund would outperform a group of hedge funds over a decade. This weekend at Berkshire’s annual shareholder meeting, the so-called Oracle of Omaha picked up his criticism of private equity.

“We have seen a number of proposals from private equity funds where the returns are really not calculated in a manner that I would regard as honest,” Buffett said on stage in Omaha. “If I were running a pension fund, I would be very careful about what was being offered to me.”