U.S. President Donald Trump and Chinese President Xi Jinping during the plenary session at the G20 Summit on July 7, 2017 in Hamburg, Germany.

Small cap stock benchmark the Russell 2000 dropped back into correction territory Thursday, down 10% from its intra-day all-time high reached last year, as investors shed riskier stocks ahead of the U.S. and China trade deadline.

“I think small caps are declining because people are still worried about growth, and if we have this trade deal fall apart, it will put pressure on growth,” Essaye said. “As global growth stagnates, it’s going to act as an anchor on the U.S. economy.”

After getting shelled at the end of last year, small caps reversed to start 2019. Small caps were having the best start to the year since 1987 before this week’s decline. The index is down 3.8% this week, more than the S&P 500’s 3.5% decline. 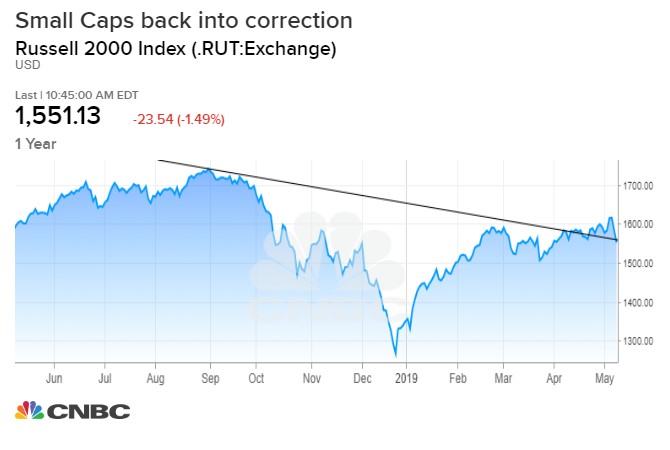 Geopolitical tensions are high as President Trump said at a rally on Wednesday that China “broke the deal” in the ongoing U.S.-China trade talks. The stock market is getting hammered on the headlines as the Dow Jones Industrial Average fell more than 400 points on Thursday.

Small caps are largely domestic companies with less exposure to China; however, these companies hold more debt than their large-cap peers which makes them more sensitive to certain economic factors.

Major investors Lee Cooperman and Mario Gabelli aren’t that worried about a trade war
Morningstar’s newly crowned money manager of the year is ‘cautious’ because of trade tensions
To Top
error: Content is protected !!
Top