A more momentous milestone lies just ahead: If the S&P 500 climbs another 4%, it will have doubled the peak reached in the previous bull market. Only three prior bull cycles have logged such a 100% gain from the prior bull peak: The great bull markets of the 1950s. the ’80s and the ’90s.

Which makes this an apt moment to assess whether this market is growing tired, or enjoying a second (third? fourth?) wind.

The table here, prepared upon request by LPL Financial strategist Ryan Detrick, shows the appreciation of the S&P 500 not from the start of a bull market but above the highest level reached in the prior bull phase.

The good news for today’s stock investors: None one of the previous three instances of a doubling over a past peak stopped there, as the circled returns indicate.

Still, in both the ’80s and ’90s, the point when stocks had doubled coincided with a welling-up of concerns about the market growing overheated. In the ’80s, this moment arrived in early 1987, as a speculative momentum phase got rolling in equities.

The S&P 500 would surge some 40% year-to-date by August 1987, before buckling and eventually succumbing to the one-day, 22% crash in October. That was literally a singular event – and this did not lead to prolonged weakness in stocks after that, or a recession. But it was no fun for those who bought on the way up.

In the ’90s, the S&P reached a 100% gain from its 1990 low in November 1996 – mere weeks before Federal Reserve Chairman Alan Greenspan wondered aloud about how to tell when “irrational exuberance” had gripped the financial markets. This helped prompt a modest market correction and gave way to a more-volatile and emotional few years in the market. But the S&P would eventually go on to double again from there before peaking in early 2000.

Because the 2007-2009 bear market was so deep and prolonged, the S&P 500 returns since its October 2007 peak do not appear heady at all. Since the S&P topped at 1565 that month, the annualized gain for the index has been 5.7%, with its total return (including dividends) an even 8%. Not terrible for an investor who bought a precarious peak, but below the long-term average, at a cost of riding out a 55% collapse along the way.

Over the past ten years, the S&P’s annual total return is now 14.7% — quite healthy, but this is partly thanks to the rather-depressed market levels of ten years ago, shortly after the last bear-market bottom. When long-running bull markets have peaked in the past, the trailing ten-year annualized returns have tended to be above 15%, which in this case would require a good deal of further upside.

More relevant to the longer-term outlook is probably valuation. Ned Davis Research this week noted that the trailing price/earnings ratio on reported profits had reached the highest 20% of all historical readings. 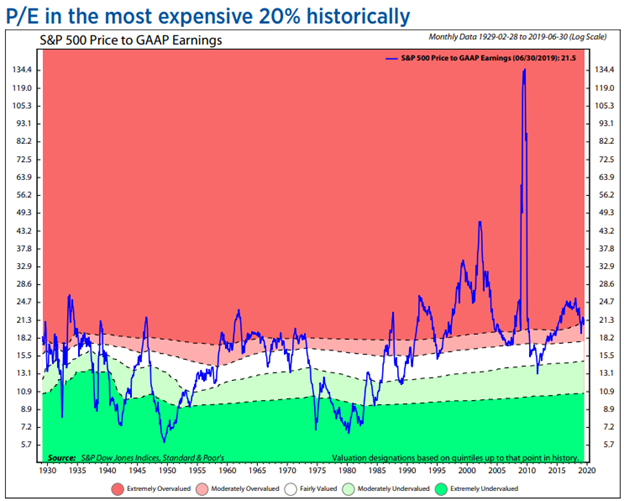 The median ten-year inflation-adjusted return starting from today’s valuation range has been 4.7% a year, well below the broad average. Yet forward returns vary widely around that median, and it’s worth noting that today’s P-E is not all that high based on the post-1990 norm. And, of course, very low interest rates today are flattering equity valuations, though this doesn’t always help rescue an investor from soft future returns.

On a more immediate basis, the current bull market is showing signs of having been refreshed by the panicky 20% drop late last year, which reset investor expectations much lower, prompted a dovish turn by the Fed and seemed to anticipate the economic slowdown that has shown up in recent data.

The latest rally to new highs has been fairly broad, with some more cyclical bellwether groups beginning to shake off the cobwebs and perform better, taking the baton from bond-like utilities and consumer staples.

Correction but no recession

Jurrien Timmer, director of global macro at Fidelity Investments, has been tracking the current market path against those of three “mini-bear” episodes from recent decades. Each of these involved a serious market correction not associated with a U.S. recession which led to easier central-bank policies and a growth revival. The present instance is hewing fairly close to the average trajectory of those of 1994-95, 1998-99 and 2011-12. 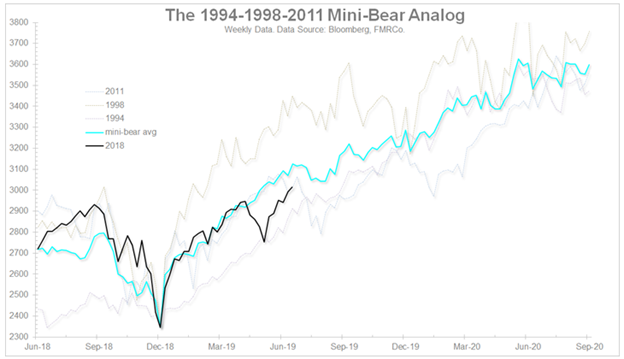 No guarantees, of course, but if those patterns are a guide, this bull market would indeed reach twice the height of the last one, and even a bit beyond.