Traders work the floor of the NYSE.

Another day, another market milestone. The Dow Jones Industrial Average surged above 27,000 for the first time ever on Thursday, just a day after the S&P 500 topped 3,000. Here’s a look at the stocks that drove the last 1,000 points.

It took the 30-stock index about a year and a half to reach the round-number record as the blue-chip benchmark first closed above 26,000 on January 17, 2018. Microsoft has been the best performer on the index, soaring more than 50% during this period. The software giant also hit $1 trillion market cap in April.

Visa is a close second, up nearly 48% since the Dow hit the last watermark. Cisco and Nike also notched gains of more than 35% over the same time. Other leaders include Merck, Disney, American Express and Procter & Gamble.

Apple, while soaring more than 28% this year alone, hasn’t been the biggest driver in the Dow’s road to 27,000. The iPhone maker was the 11th performer, gaining 13% over the period. 3M, Walgreens and Caterpillar have underperformed the index, all down more than 20% since the Dow reached 26,000. 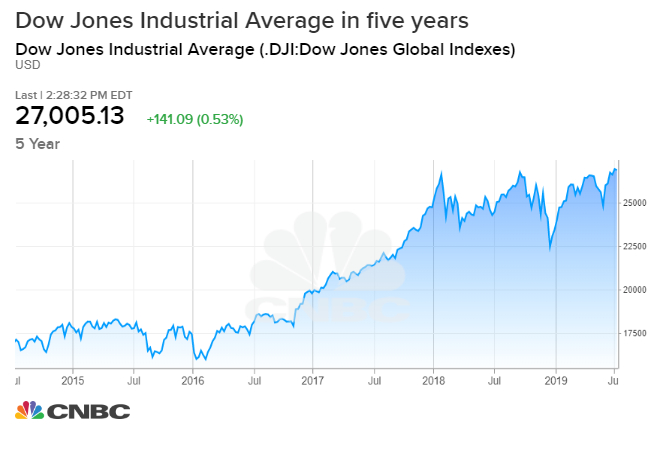 The Dow has risen nearly 16% this year and a jump in healthcare stocks pushed the index over the 27,000 mark. Shares of Dow-component UnitedHealth surged 5% after the White House said it has withdrawn its proposal to eliminate rebates from government drug plans, a big step in its effort to lower prescription drug prices.

Watch Fed’s Randal Quarles speak from the Bipartisan Policy Center in Washington
The Fed could be building a bubble if it cuts rates
To Top
error: Content is protected !!
Top