Traders and financial professionals work during the opening bell on the floor of the New York Stock Exchange (NYSE), May 14, 2019 in New York City.

The latest bout of trade-war jitters sparked a rally in Treasurys as investors fled to safe havens from risky assets, pushing the yield on the 10-year Treasury note to a 19-month low. But history shows there are big stock winners when yields fall.

The 10- year yield, which moves inversely to price, has fallen around 25 basis points in May, while the S&P 500 has dropped more than 4% this month as investors grappled with the escalated U.S.-China trade war.

CNBC analysis using Kensho, a hedge fund analytics tool, found which stocks in the Dow Jones Industrial Average have been the biggest winners in 30-day periods when the 10-year yield declined at least 20 basis points.

The data show Verizon, UnitedHealth, Coca-Cola, McDonald’s and Walmart have been the best performers in the Dow during those periods of declining yields. Verizon has risen 1.78% in the 30-day period after the 10-year yield dropped more than 20bps, while UnitedHealth, Coco-Cola and McDonald’s all eked out gains of more than 1%. The S&P 500 on average has dropped 1.17% in those periods.

It’s actually no surprise that these stocks are winning bets during heightened market uncertainties as they all provide big dividends and are relatively less impacted by economic weakness. Drug giants Pfizer and Merck are also leaders in the 30-stock Dow during periods of falling yields.

This group is already showing their resilience as all of them are in the green this month amid trade tensions and weak economic data. Notably, UnitedHealth surged nearly 6% month to date, while Verizon has risen more than 4%. 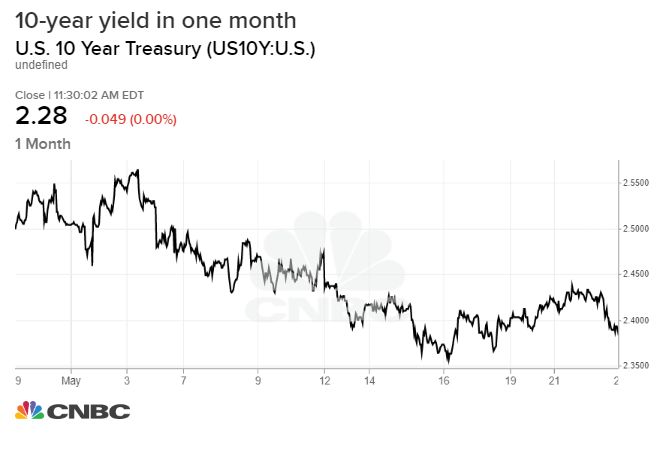 Yields extended their declines last week after survey data showed U.S. manufacturing activity tumbled to more than 9-year low on trade war worries. Low rates may be here for longer as the trade-war tensions show no signs of easing.

“Month-end, seasonals, and a supportive technical landscape all point toward an extension of the current rally in Treasuries,” Ian Lyngen, BMO’s head of U.S. rates, said in a note on Tuesday.