Traders and financial professionals work on the floor of the New York Stock Exchange.

Of all the problems that have been haunting the market since early May — nonexistent China trade deal negotiations, an inverted yield curve, a slowing economy, Mexico tariffs — only one has gone away, and yet stocks keep ripping higher with the S&P 500 only about 2% from its all-time high.

The Dow Jones Industrial Average was sitting about 3% from its record Tuesday, riding a big Monday gain that followed the U.S. and Mexico reaching a deal to avoid tariffs. Driven by hopes of a rate cut, stocks’ swift comeback from the May turmoil seems a bit irrational, strategists said.

“You had a market that became very pessimistic and then all of a sudden we had the Fed’s dovish rhetoric and no Mexican tariffs, and that’s basically causing a squeeze,” said Tom Essaye, founder of The Sevens Report. “This rally is not fundamentally backed. Instead what we are seeing is a bunch of people getting swung around and now they are chasing stocks higher.”

Federal Reserve chair Jerome Powell said last week the Fed will “act as appropriate to sustain the expansion, ” which caused traders to bet big a rate cut was coming. Traders are pricing in a nearly 70% chance of a rate cut in July and about 60% probability of three rate cuts this year, according to the CME FedWatch tool based on Fed funds futures.

“If the Fed cuts three times between here and January, this economy is headed for a recession,” Essaye said.

The market is also betting on a trade resolution between the U.S. and China despite the lack of a clear sign. President Donald Trump and Chinese leader Xi Jinping are set to hold a key meeting later this month at the G-20 summit.

“The sentiment seems that both sides are motivated and China perhaps could be facing some stiffer challenges when it comes to supporting their economy than the U.S. would be,” said Mike Loewengart, chief investment officer at E-Trade Capital. “Our dispute with China is perhaps still the single largest cloud over the market. The issue is not going away.”

Trump warned Monday that if Xi does not attend the meeting, more China tariffs will go into effect immediately. Both countries have slapped tariffs on billions of dollars of each other’s goods, while ramping up threats to damage one another’s trade.

The rally was also accompanied with weaker economic data including a dramatically slower jobs creation in May, which further fueled rate-cut bets.

“It is not intuitive. It’s actually perverse that we see a moderating of economic data is translating into a stronger market environment,” said Loewengart. “A lot of optimism these days is due to the hope that the Fed will cut rate. That anticipation is being fed by the moderation of economic data.”

Meanwhile, there is a warning sign in the bond market hinting that a recession might be on the horizon. The yield on the 10-year Treasury note is now below that of the 3-month bill, inverting part of the so-called yield curve. An inverted yield curve has been a reliable recession signal watched by the Fed.

And even as stocks have roared back this month, the CBOE Volatility Index, AKA ‘The Fear Gauge’, has remained relatively elevated. On Tuesday it was around the 16 level, about where it jumped to when the first bout of selling began in May. 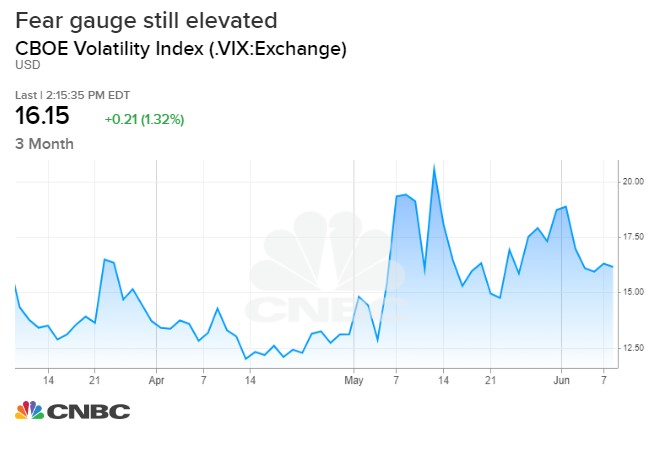 “We are seeing a market that doesn’t know what to think right now and as such we were getting air pockets to the downside and now we are having wild chases. That seems a bit absurd that we are that close from all time high,” Essay said.

Market will not like it if Trump continues to use tariffs for political agenda
Mary Meeker just published her highly anticipated internet trends report — read it here
To Top
error: Content is protected !!
Top