Investors are worried the U.S. and China may not find enough common ground to head off a new round of tariffs later this week that could bite into global growth, squeeze profit margins and drive down stock prices.

Trade negotiators are scheduled to meet this week in Washington, but recent tensions make it less likely a deal will be agreed to before the Trump administration unleashes a new round of tariffs. Analysts say a deal is still possible, but the risks have risen that there will be more tariffs before a deal can be agreed, and it could then take a lot longer than expected for an agreement to be hammered out.

Stocks plunged and bonds rose in a safety trade Tuesday, after the Trump administration set the clock ticking on a 12:01 a.m. ET Friday deadline for raising tariffs to 25% on $200 billion in Chinese goods. Trump administration officials said they still expect to meet with a Chinese trade delegation this week, but at a media briefing late Monday they said their Chinese counterparts reneged on some key areas of agreement in trade talks.

“It all depends on what happens Friday. Traders were not expecting this. The market is trying to discount it in case tariffs get reinstated,” said Scott Redler, partner with T3live.com. “This is a curve ball, unexpected scenario.”

With the threat of tariffs, analysts say many of Wall Street’s assumption for profits and growth would have to be tossed —suggesting that stocks could be too richly priced near recent highs.

The forward price-to-earnings ratio on the S&P 500 was at 17 times earnings expectations. “That has to come down because growth has to come down…A good part of what went on in this market was predicated on a deal getting done in the first place. If that’s not the case, we have to start taking [earnings] estimates down,” said Art Hogan, National Securities chief market strategist.

Keith Parker, chief U.S. equities strategist at UBS, said the hit to S&P 500 earnings would be 2% or greater, if the 10% tariffs on $200 billion in Chinese goods are raised to 25%. Parker said earnings would be hit by 7% if there was a full blown trade war, while the S&P 500 could trade in a range of 600 points on different scenarios of escalation of trade wars to de-escalation. The S&P is now near the top of the range, he said.

“We think the most likely path is the deal. But escalation risks have risen and the growth backdrop is bit better so [investors should be] selectively staying involved in cyclicals and look for ways to hedge,” said Parker. “The S&P is probably trading much more in line with a status quo or some form of a deal. I would say it’s not pricing that trade war scenario.”

The seeming divide between Chinese officials and the Trump administration added to concerns, after week’s of positive commentary from both sides.

Hogan said China’s comments are problematic and could indicate the two sides are far apart. “They’re not going to back down from the parts of the deal they want. They don’t want to have a full account of the deal made public,” he said.

But at the same time, leaders in Washington and Beijing may feel like they have more leverage in the negotiations. China’s recent data has shown its economy is stabilizing after months of fiscal and monetary stimulus. The Trump administration too must be feeling upbeat after a strong U.S. jobs report and higher stock prices.

Analysts said the threat of new tariffs puts assumptions about the market at risk, including the expectations for 3% earnings growth this year. Earnings in the first quarter grew at 1.2%, much better than earlier estimates for a decline, and second quarter S&P 500 earnings growth is expected at 1.5%, according to Refinitiv. 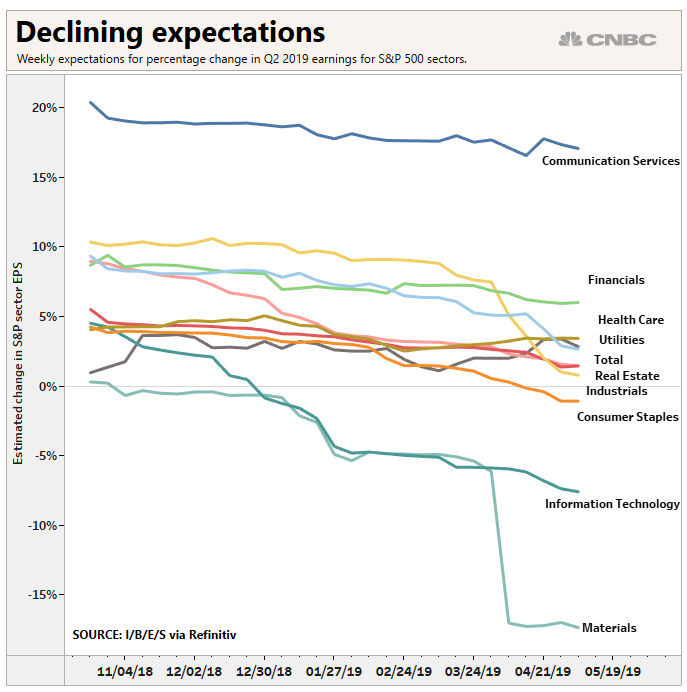 On Tuesday, stocks reversed the pattern of Monday, where the worst losses were in the early morning as markets reacted to President Donald Trump’s Sunday afternoon tweets threatening more tariffs. As the day went on, stocks shook off losses as traders took the president’s threats as more a bargaining ploy by the president.

Global equity markets could also take a hit, as global growth would expected to slowdown on another round of tariffs.

“I think that we will get a deal,” said Rojas. “I’m still hopeful there will be an announcement that tariffs will not increase, and that they will come to an agreement…If that’s not the case, and there is a tariff increase on Friday , I will change my base case to having an escalation of trade tensions.”

Rojas said if that’s the case, then a deal might be a much longer way off. China might not come back to the table in a serious way, until after it felt the pain of tariffs. The U.S. would also be hit by Chinese tariffs, and that would also come as U.S. growth was already slowing down from last year’s level.

“The problem is we don’t know what the stick point is. This is the black box. We’re still concerned because neither side said anything positive,” Hogan said, adding the situation could easily be made worse by tariffs.

“That’s where this turns form a trade negotiation to a trade war because it’s bad for both economies,” Hogan said.

Stocks that would be hurt most by the increase in tariffs include retailers, tech, and industrials. Caterpillar fell 2.3%; SMH, VanEck Vectors Semiconductor ETF lost 2.3%

Goldman Sachs retail analysts Tuesday said companies had been moving to protect themselves against tariffs, when they were at 10% but may have not expected the increase to 25%, given optimism around the talks. Investors may also not have factored in any further tariffs.

“Within our consumer coverage, the most signiﬁcant category on the $200bn list was furniture – retailers exposed to this category, such as Big Lots (BIG), could see a negative impact, ” the wrote. But the analysts added that companies that buy goods from China, such as Dollar Tree and Five Below could also be negatively impacted.

“We note that DLTR already included the impact of a move to 25% in FY19 EPS guidance, but based on our conversations, investors were anticipating upside if tariffs stayed at 10%,” they wrote.

Stick with stocks immune to a trade war
Beyond Meat, Boeing, Mylan & more
To Top
error: Content is protected !!
Top