Uber could go public at a stock price that would make it bigger than some of the best-known names in the S&P 500.

The ride-hailing company plans to list shares between $44 and $50 in its upcoming initial public offering, several news outlets reported Thursday, citing people familiar with the matter. That would value the company at as high as $90 billion when it lists on the New York Stock Exchange, according to a Bloomberg report.

The eye-popping figure would make it more valuable than S&P juggernauts like DowDuPont, General Electric and Caterpillar, according to data from Finviz.com. It would also top Morgan Stanley and BlackRock, with market capitalizations of $81 billion and $74 billion, respectively. 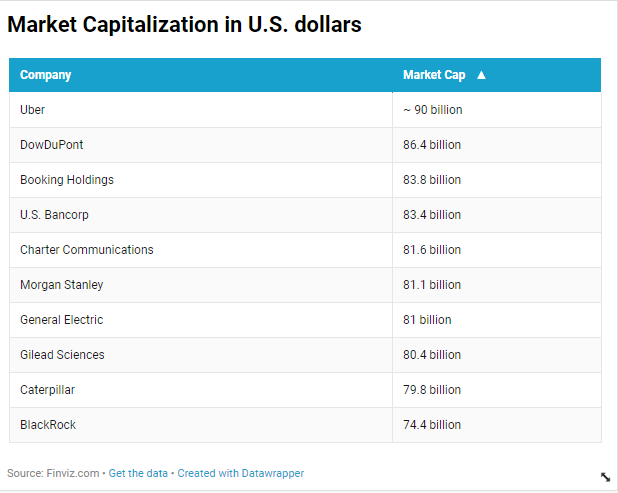 Uber is different from its potential market-cap peers in a key way — it’s not making money.

The San Francisco-based start-up has been mounting billion-dollar losses ahead of its market debut. Its adjusted losses totaled $1.85 billion in 2018, according to its initial IPO prospectus. Those losses slowed from 2017, when Uber lost $2.2 billion. The company increased its revenue to $11.3 billion, up 43 percent year over year.

Most tech companies are not known for making money ahead of public offerings. Lyft, which went public in April, had a loss of $911 million on $2.1 billion in revenue last year. Twitter was losing money when it listed on the New York Stock Exchange in 2013. Snap, Spotify and SurveyMonkey — which all listed in 2018 — were also bleeding money.

Lyft, Zoom and Pinterest all priced above their marketed range this year. The valuations for these tech unicorns are based on future profits, since almost none of their businesses are profitable yet.

Market valuation expert Aswath Damodaran has said the recent totals are far too high — or as he put it, “scary.”

“I’m a little scared of Uber at $100 billion,” the NYU Stern professor told CNBC. “I think both Lyft and Uber are struggling with a way to convert revenue growth into profits. So you are paying $100 billion for a company that still doesn’t have a viable business model. That’s scary.”

WATCH:
Uber’s IPO will be five times the size of Pinterest and Zoom’s IPOs combined

Mary Meeker, one of the most-followed technology forecasters, raises $1.25 billion for a new fund
Amazon, Ford, Intel and more
To Top
error: Content is protected !!
Top